So I saw one of these in a parking lot yesterday: 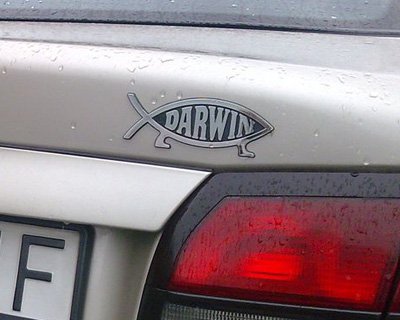 And it immediately made me think of Jeffrey Epstein. Why?

Al Seckel was active in the Freethought movement…… In 1983, Seckel and John Edwards co-created the Darwin fish design, which was first sold as a bumper sticker and on T-shirts in 1983–84

In 2009 Seckel was involved in organizing a science conference with financier and convicted sex offender Jeffery Epstein. The Mindshift conference took place in 2010 on Epstein’s private island Little Saint James.

So the guy that helped create/design the “Darwin Fish” once helped organize a party on Pedophile Island.  Oh, and keep in mind that Epstein was convicted and registered as a sex offender in 2008.

But now I am cursed.  Everytime I see one of those Darwin Fish, I am going to be reminded of Epstein and his connections to atheist actvism.

This entry was posted in atheism and tagged atheism. Bookmark the permalink.

This site uses Akismet to reduce spam. Learn how your comment data is processed.