Two Madison women trained in healing have been arrested in the assault of a state senator. 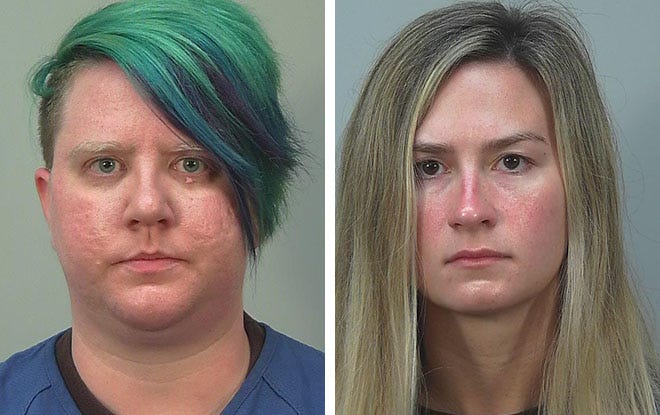 Samantha Hamer, 26, and Kerida O’Reilly, 33, were arrested Monday on charges of substantial bodily injury and robbery with use of force for their alleged role in the beating of state Sen. Tim Carpenter, a Democrat from Milwaukee.

That night, groups toppled statues outside of the state Capitol and dragged them away. State property, including Capitol windows, also were damaged. A Molotov cocktail also was thrown into a county building that housed the 911 dispatch center.

Carpenter, 60, was attacked and beaten after he began filming the group in a public street, which is legal. He said he was punched and kicked by eight to 10 people and suffered a concussion.

If by some strange chance either one of these women come across this blog posting,  let me make one simple point to them.

Now that you two have chosen violence, and this has resulted in negative consequences for your careers (for example, I would never use a physical therapist who has a history of beating on elderly people), I can only hope that you begin questioning your moral position.  Any moral position that so easily embraces violence against other humans to score political points is a moral position that is deeply flawed.  Again, you two physically attacked and beat an elderly man while I have never done anything like this.

This site uses Akismet to reduce spam. Learn how your comment data is processed.