The Power of Social Justice Religiosity

In some ways, it is fascinating to watch the way in which social justice ideology causes adherents to behave as if they are in a radical, religious cult. Take, for example,  a community that “has been a refuge for scrappy working-class activists with far-left politics.”  Being Holy and Pure Social Justice Activists, they decided they would no longer call the police on anyone because the police were Evil:

After the death of George Floyd at the hands of the police, Ms. Albers, who is white, and many of her progressive neighbors have vowed to avoid calling law enforcement into their community. Doing so, they believed, would add to the pain that black residents of Minneapolis were feeling and could put them in danger.

Of course, anyone with an IQ above 80 could have predicted what would happen next.  It turns out their neighborhood is becoming a magnet for homeless drug addicts and thieves.  Yet many still cling tightly to their holy doctrines:

She worries that a lot of what has been written about the camp on community message boards has been influenced by racial profiling. To the extent that illegal activity is going on in the park, Ms. Miller does not blame the tent residents. “My feeling around it is those are symptoms of systemic oppression,” she said. “And that’s not on them.”

Some, however, are experiencing guilt:

Ms. Miller came to see her decision to buy a home in the neighborhood as potentially preventing a person of color from doing so. And while Ms. Albers used to feel only pride about the work she put in to revitalizing the community, now, she sees her work as gentrification that may have pushed out nonwhite residents.

Yet, if there is to be a monthly award for the most Woke Acolyte, Mr. Erickson would be in the running:

END_OF_DOCUMENT_TOKEN_TO_BE_REPLACED

Richard Dawkins and the Pedophile Apologist

Humut Kentler was the social scientist who, according to Wiki, “used his position to turn children over to a powerful pedophile network disguised as research.”  When reading to the Wiki article about him, what caught my attention was this description:

Kentler warned the parents against making too much of a problem of also involuntary sexual contacts of children with adults: “The wrong thing to do now would be for parents to lose their nerve, panic and run straight to the police. If the adult had been considerate and tender, the child could even have enjoyed sexual contact with him.[16] Kentler considered equal and non-discriminatory sexual relationships between adults and children to be hardly problematic

This is strikingly similar to something atheist Richard Dawkins wrote a few years back:

First, just because some pedophile assaults are violent and painful, it doesn’t mean that all are. A child too young to notice what is happening at the hands of a gentle pedophile will have no difficulty at all in noticing the pain inflicted by a violent one. Phrases like ‘predatory monster’ are not discriminating enough, and are framed in the light of adult hang-ups.

END_OF_DOCUMENT_TOKEN_TO_BE_REPLACED

Who Needs Reason When You Got Emotion?

On June 25, Myers posted a short blog entry critical of a pagan who thinks she can channel George Floyd:

Ugh. “Spirituality”. Another excuse to grift. This white doofus claims to “channel” the spirit of George Floyd, and that he’s telling everyone to stop fighting for civil liberties, and all lives matter.

Ugh. “Spirituality”. Another excuse to grift?  If she had channeled the need to keep protesting, I doubt Myers would have had the same reaction.

Afterall,  just a day before, on June 24th, Myers wrote another blog celebrating a paranormal figure:

END_OF_DOCUMENT_TOKEN_TO_BE_REPLACED

In a previous posting I wrote,

A study conducted by the University of Hildesheim has found that authorities in Berlin condoned this practice for almost 30 years. The pedophile foster fathers even received a regular care allowance.

Helmut Kentler (1928-2008) was in a leading position at Berlin’s center for educational research. He was convinced that sexual contact between adults and children was harmless.

Berlin’s child welfare offices and the governing Senate turned a blind eye or even approved of the placements.

Notice how many of the pedophile predators were intellectuals from academia:

Several years ago two of the victims came forward and told their story, since then the researchers at Hildesheim University have plowed through files and conducted interviews.

What they found was a “network across educational institutions,” the state youth welfare office and the Berlin Senate, in which pedophilia was “accepted, supported, defended.”

The researchers found that several of the foster fathers were high-profile academics. They speak of a network that included high-ranking members of the Max Planck Institute, Berlin’s Free University, and the notorious Odenwald School in Hesse, West Germany, which was at the center of a major pedophilia scandal several years ago. It has since been closed down.

It would be interesting to know the names of these high-profile academics.

A Third Example of Racism as Apophenia

No need for me to comment on this.  Yet as they say, One’s an anomoly, two’s a coincidence, and three times a pattern:

NEWS: The FBI has just released a statement about the NASCAR noose incident at Talladega, indicating it was a misunderstanding. No crime was committed. The noose was already there as early as last year. pic.twitter.com/j2MGrOvUN3

Let’s have a look:

An argument resulted in murder inside Seattle’s CHOP early Saturday morning, just a block from the police precinct Mayor Jenny Durkan ordered police to abandon a couple of weeks ago.

On Thursday, police arrested Robert James after he left the CHAZ. He is accused of sexually assaulting a deaf woman who was lured inside a tent. The same day, former city council candidate Isaiah Willoughby was arrested on suspicion of starting the arson attack on the East Precinct June 8.

“…lured inside a tent…” This indicates that the alleged sexual assault occurred inside CHOP but the self-appointed armed patrol inside Seattle’s “autonomous zone” did nothing about it. CHOPistan uses tents for food distribution, gathering points, and all manner of other purposes. And this is one known sexual assault. Police cannot get in to deal with the vast majority of calls coming from inside CHOP for the time being.

Y’know, if you got rid of the police, wouldn’t it be easier for sexual predators to engage in their sexual assaults and rape?  Isn’t it fair to say that PZ Land enables rapists and sexual predators?

ETA: There’s other evidence of sexual assault in PZ Land:

One of the Antifa extremists who created the Capitol Hill Autonomous Zone was just ousted as a sex offender. They tried to manipulate everyone by pretending to be suicidal on Twitter. pic.twitter.com/pojLBhZrxO

Another Example of Racism as Apophenia

Oakland’s mayor said five ropes found hanging from trees in a city park are nooses and racially-charged symbols of terror…..Mayor Libby Schaaf said Wedesday that a hate crime investigation was under way after a social media post identified a noose at the city’s popular Lake Merritt. Police said they searched the area on Tuesday and found five ropes attached to trees.

Victor Sengbe, who is black, told KGO-TV that the ropes were part of a rigging that he and his friends used as part of a larger swing system. He also shared video of the swing in use.

“Out of the dozen and hundreds and thousands of people that walked by, no one has thought that it looked anywhere close to a noose. Folks have used it for exercise. It was really a fun addition to the park that we tried to create,” Sengbe said.

So exercise equipment was seen as “nooses” and racially-charged symbols of terror. Textbook example of apophenia.

The most troublesome part is even though it is now obvious no racism or hate is involved, the city leaders are doubling down.  Truth no longer matters:

Schaaf said officials must “start with the assumption that these are hate crimes.” However, the mayor and Nicholas Williams, the city’s director of parks recreation, also said it didn’t matter whether the ropes were meant to send a racist message.

“Intentions don’t matter when it comes to terrorizing the public,” Schaaf said. “It is incumbent on all of us to know the actual history of racial violence, of terrorism, that a noose represents and that we as a city must remove these terrorizing symbols from the public view.”

“The symbolism of the rope hanging in the tree is malicious regardless of intent. It’s evil, and it symbolizes hatred,” Williams said.

Intentions don’t matter???  Isn’t hate supposed to be the intention that makes things so evil?

When Racism is Just Apophenia

What, you may ask, is apophenia: 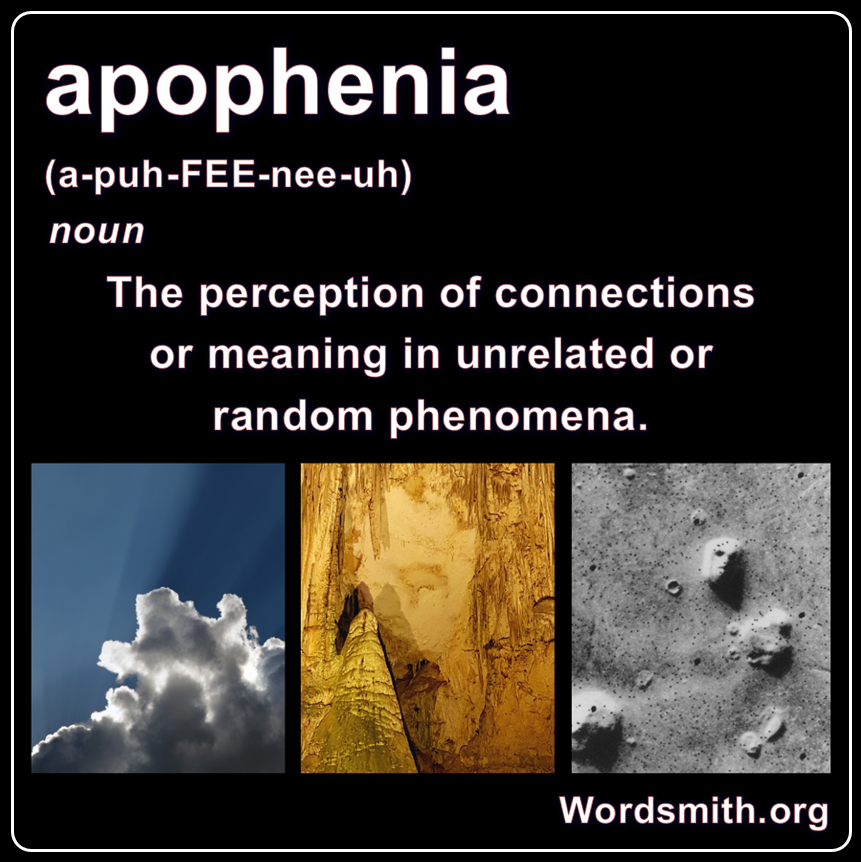 A good example of racism as apophenia recently occurred:

Black Lives Matter activist and former UK member of Parliament Fiona Onasanya went after Kellogg’s Monday for perpetuating an exhaustively racist society with the presence of “three white boys” serving as the mascots of one of its signature cereals, Rice Krispies.

As a BLM activist, and one who benefits from accusing others of racism, Onasanya’s mind is primed to see racism where none exists.  Thus, it is not surprising that she thinks Rice Krispies is racist.

The True Nature of the “Protesters”

Keep in mind that people like atheist PZ Myers actually supports the “protesters”:

We’ve long known that social justice atheists are insufferable with their bloated sense of self-righteousness coupled to a slavish devotion to primitive emotions (the “id”), but it should also be more clear these days that it is probably also linked to the death of brain cells.

The Minneapolis city council has committed to dismantling the police department!

Myers is happily excited about this.  Now, what type of person would be excited about “dismantling the police department?”  Criminals.  Ah, but I don’t think Myers is a criminal.  That leaves us with wild-eyed zealots.  And yeah, Myers would qualify there.  Look, you have to be a Far-Left Hyper-Extremist Zealot, with a brain long marinated in fanatic rhetoric and propaganda, to actually think dismantling the police is a good thing.

For example, try not to laugh at the idiocy of the Minneapolis politicians (idiocy applauded by Myers):

While some council members have provided hints of what the changes might mean — sending mental health professionals or social workers to respond to certain emergencies, for example — the group did not present a single, unified vision for how they would replace policing in Minneapolis.

A woman is at home by herself late at night and a man with a ski-mask is trying to break in her back door.  Who is she going to call?  A social worker!  A therapist!!